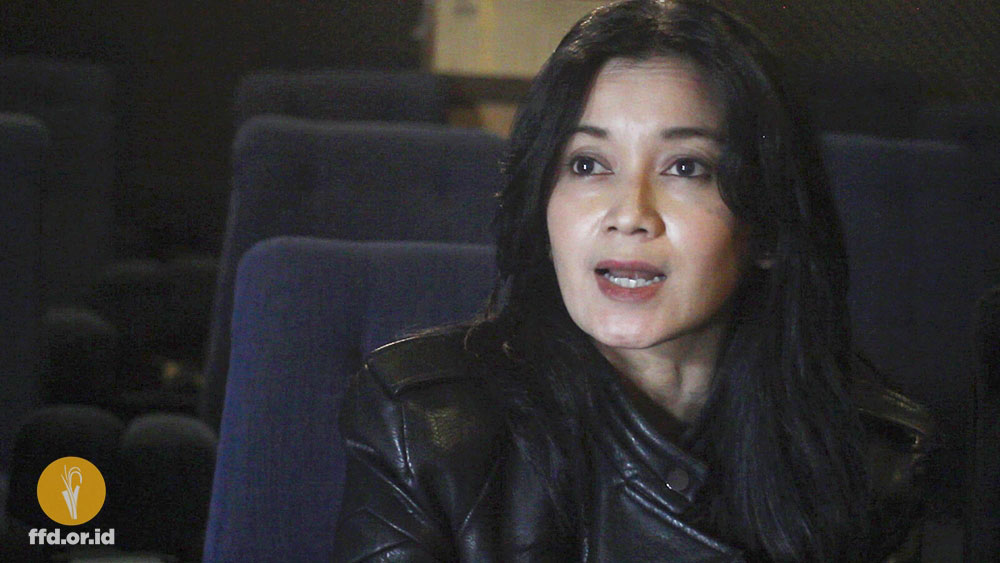 For Vivian Idris, duration is an important thing in making short documentary film. Filmmakers should be accurate in making story development in the limited duration. Festival Film Dokumenter 2017 invited Vivian Idris as one of jury board member for Short Documentary Competition.

This time, Publicist Team of FFD 2017 has a chance to interviewed one of  influential woman filmmaker in Indonesia.

Can you tell us about what makes you interested in film until involved as jury board member in several film festival?

V: Around 2006 or 2007 when i worked in the establishing Kalyana Shira Foundation with Nia Dinata and other friends. Kalyana Shira Foundation is a production home which focused in documentary film, especially woman-themed ones. From there, after produced some films, i began invited as jury board member in several film festivals. FFI, FFD, Eagle, Festival Film Surabaya, Festival Film Education white implemented by the government, Anti-Corruption Film Festival, and 21-Short Film Festival.

V: for me, Documentary film in Indonesia growing quite rapidly with the richness of story. I’m a documentary filmmaker myself, so i can see that Indonesia is actually having so much source of topic, there are so much discourse that can be brought to surface in documentary film from culture, social matters, economy, and political.

We also can see on how more democratic the technology and information about filmmaking that can be found everywhere, is having influence to documentary filmmaker in producing their film, then pushing them to be more productive.

i think, the barrier is becoming so small for filmmakers nowadays. But, there is also something that is noteworthy in producing documentary film. Especially, i see that usually the problem is around the research phase. It’s so obvious that the research is enough or not.

Then how the filmmaker bring the story. There are so much stories that is actually have no ending or maybe the filmmakers are not patient enough for the story to unfold until the ending point.

For reference, there is so much already. From senior foreign filmmaker or domestic with variety of format and story telling. Indonesia Filmmaker actually can beat those foreign filmmakers, but there’s still topic or discourse that doesn’t get enough attention.

According to you, what topic that actually interesting to be raised in this time, but still has not got much attention from filmmakers?

V: There’s so much interesting theme of course, in my personal preference, i see cultural and local wisdom theme which actually rarely being produced. Maybe in two or three years back people has started giving attention for the themes.

I don’t know why people is not interested in highlighting this topic. Maybe because this kind of theme is not exposing real conflict, but actually conflict should not always “punching’, right?

Culture and local wisdom is actually one of the treasure in Indonesia. i think every place in this country is having their own culture and local wisdom. Maybe if we take note more thoroughly and not only seeing it in just one live time. How is the uniqueness of some places, or social, political and economy life in several places is interesting to be observed. Instead, i see that kind of story in fiction films like BW Purbanegara with Ziarah which the style is so documentary, then Turah and Siti. Realistic story approach, but it’s actually the story that is close with our everyday life, then packed in interesting way. I think documentary filmmaker also must give attention to the topic from local issue, because there’s so much thing that can be highlighted from local issue, which i think, Indonesia filmmaker is still not exploring it enough.

What is obstacle that usually faced by short documentary filmmaker?

V: i see the difficulty of making short documentary film, mush of them is packing a complete story with short duration. That is the problem which not only faced in documentary, but also in fiction film. It means, getting a complete story from the beginning, middle, and ending possible in the limited duration is quite difficult. So, mostly the films, especially documentary, the footage seems like it’s still a research footage, unfinished work, so the story is not completed, in the end, the filmmaker is confused on how to sharping the story.

Maybe, i don’t know, but one of obstacle when we are choosing the focus, we should be really sharp. Because the limited duration means the story must be unfolded, developed with enough duration which not long enough.

Meanwhile, in feature-length documentary, the problem usually in the footage, which we didn’t have enough footage, and this is also experienced by me. Because everything is digital nowadays, the film is no more problem. We can take footage as much as we want. The-too-much footage is sometimes becoming temptation. The film then becomes not-so-tight, it’s a waste to cut. Because we think that the producing process is so difficult and such, so it’s becoming difficult to determine the focus.

I think that problem can be overcome by planning more well-done story line. Of course because of documentary should have spaces to accommodate the chance which occurred in the field. I think that is significant in short and feature-length documentary.

According to you, is there anything that influenced audience interest in documentary film?

First, the  story must be interesting. Because film, no matter what, is a story that told through audio visual. The way it’s being told should be interesting and should be catch perfectly by the audiences. The issue is also can be an interesting factor in attracting audience. What is the topic? What is the theme? Then of course technical matters. Event though people mostly said that documentary usually make use of technical point of view.

But for now, i think it’s no more like that. Maybe, before we can’t find so much variety of style, exposure, or information, but this is the era of internet and free-information. Documentary filmmaker can catch up on technical matters like visual and audio.

What is your testimonials for FFD?

For this year’s FFD, I become a jury board member for Short Documentary FFD 2017, actually, i expect more in variety of film and different styles of films that were submitted in this competition. There are six film that nominated in the category, not so much film with different theme. But, there is one or two films that are stand out. I home, in the next year we can meet more documentary filmmaker who submitted their film to FFD. Or maybe the information should be disseminated further until the remote areas. Because i think there are so much potential documentary filmmaker there, and also they have interesting content that we don’t know before. It can be something fresh, something new in story or speech, because how people speech is actually influenced by the culture around them.