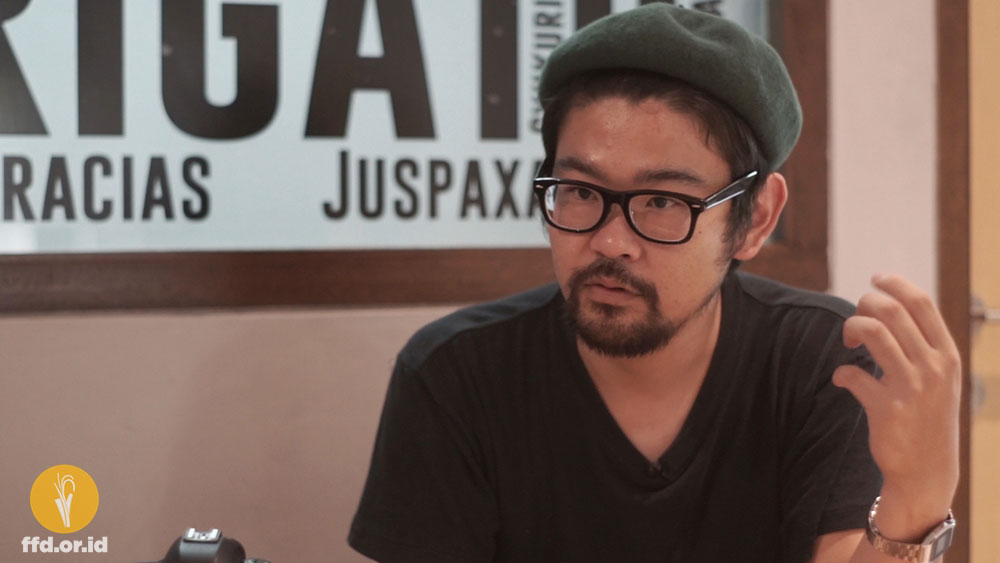 Interview with Takuro Kotaka, Director of The Village’s Bid for UFO

Takuro Kotaka, a documentary filmmaker from Tokyo, Japan, is having his own unique way to documented a social issues. Through “The Village’s Bid for UFO”, he catched native citizen’s responses on Nuclear Plating in Suzu, Ishikawa Prefecture, a beautiful small village in Japan. Using ad-libs to built comedic atmospere in his film, Kotaka said that his film might be seems like fiction documentary, meanwhile not.

“My film is actually VERY documentary!” he claimed  firmly when Publicist Team of Festival Film Dokumenter interviewed him. This is the result of our interview session with Takuro Kotaka-san. Enjoy!

What is your opinion about Post-Truth in general?

T: i never thought in making film with Post-Truth as the topic, so actually i don;t really understand about post-truth itself. This is still new for me. But, i think post-truth term is recently got so  famous, between two or three years back.

What i know about post-truth is that is a political phenomenon in the media, oftenly used in Europe and Unites States in Trump’s campaign perion. But actually, i still foreign with the term itself, moreover in Japan, we still shuted out from international issues.

Could you please explain more about the contain of your film “The Village’s Bid For UFO”?

T: A year or two back we, Japan filmmaker couldn’t make that contained political issues or nuclear planting freely. The government always watching over us and forbidding strictly. But, as a filmmaker, moreover documentary, we are so concerned over the issues, and orr purpose is not only to criticismm but also build awareness in people’s mind about what is actually happened around them. So, we keeps finding way how to still make film about those issues through documentary, but with totally different ad-libs to represent the issues. UFO is one of them.

“The Village’s Bid for UFO” tells about Suzu and how a beautiful village with abundant agricultural products becoming Japan Government’s target to be the  site of nuclear planting. In every perspective, nuclear of course can help people aroundther to keep alive, the government ensure that. But, of course there are some parties that resisting because they are greatful enough of what they have right now; good agricultural products, good air, and good food. This film then tells about how nuclear planting that represented by UFO’s attendance is very expected by people, yet also resisted by them who life is don’t want to be broke, with comedic and funny way.

In perspective point of view, how Post-Truth is your film?

T: I never think that a film created based on an issue about truth. “The Village’s Bid for UFO is fiction documentary. I intentionally make it like that because film is supposed to make the audience comfortable and enjoy the story while watching it, with no need to be burdened by the fact behind it. It makes the message that is full of fact can be accepted by the audience. Therefore, this film is made by discussing the ad-libs with the native people around Suzu as the actor and interviewees to portray what kind of UFO to represent the mesage. I think, The UFO itself is that might be called as the Post-Truth object because it raises the question of what kind of UFO that the audience catched from this film, and the UFO’s good or bad values  actually depend on how the audience see the film.

We got so much question about the dance in the film. Actually what kind of dance is that?

T: The dace is actually  combination of Japanese traditional dance and ritual dance of summoning UFO in America. Someday i read a book that contained information of that ritual. To be exact at the part when people who is doing it forming a big circle and holding hands together. In Japan, we have Bon-Odori (a flash mob dance with traditional music instrument with mantra-like singing and very full of spirit). In Japan, we did so many Bon-Odori in various ritual and events. So, the dance in this film is like a combination of Bon-Odori­ with small insert of summoning-UFO ritual to portray “The Village’s Bid for UFO” itself.

Majority of your film is records about several places that you visited. Can you explain about in-the making of your films?

T: I love traveling and i travel a lot. I’ve been visited America, Africa, most of Europe, and now i live in Chiang Mai, Thailand. I like to seeing around. For the makin process of my films is because most of it was documentary, so it only need DSLR camera and yeah, how we as filmmaker addressing the issues that we raised.

As a filmmaker that focused in social phenomenon, how you saw these phenomenon and filmed it?

K: Here, i just simply saying that every filmmaker have their own style in making film. Like me that actually having Contemporary Art background. You can see it in my film, i make documentary film with ad-libs and looks like fiction documentar, whereas, the story backgound behind it is really deep and can affect its audience. Those kind of things that then can form typical point of view of an artist.

What is your next plan  of another documentary creation?

T: In Jogja? I have this plan to stay here for  two weeks after the festival ended, and i will have meetings with several filmmakers from Surabaya, Bandung, and other city in Indonesia to talk about documentari. I will learn more about documentary production here because actually my backgroung is Contemporary Art.

How is your testimony about Festival Film Dokumenter 2017?

T: Very Good! I think Festival Film Dokumenter can be a space where discussions about the occured issues started and getting its attention. With creative process that needed, of course.