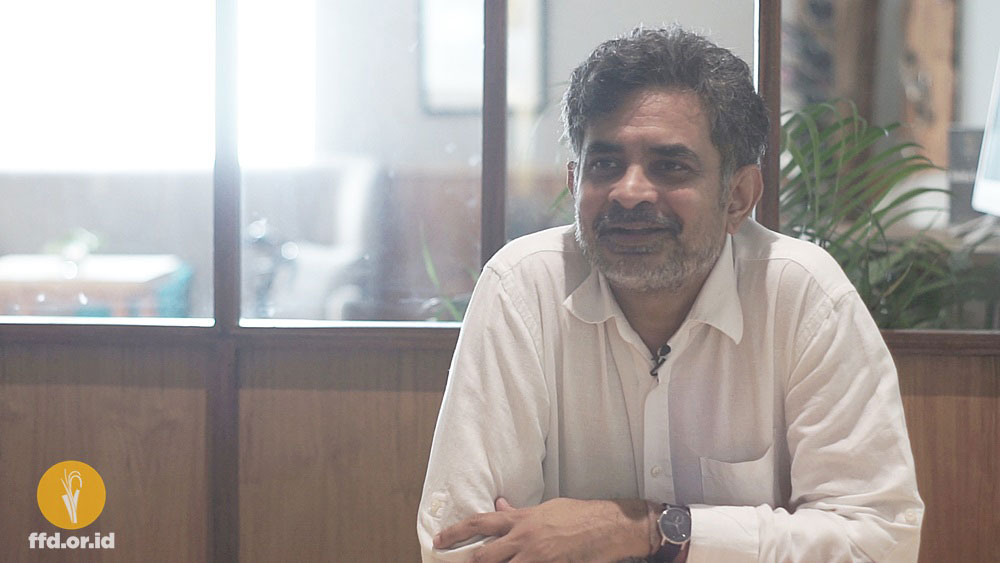 This time, Publicist Team of Festival Film Dokumenter has an opportunity to interview Sandeep Ray, a  documentary filmmaker, writer, reviewer, and lecturer in STUD-HASS. He has been involved with FFD since 2008, makes his perspective of Competition program is very wide. Below is the result of our talk with one of Jury Board Member of Feature-Length Documentary competition FFD 2017.

Can you tell us about how you can be involved as Jury Board Member of Competition Program FFD 2017?

S: I make documentary several times, i also lecturing, writing reviews, i also has been involved with FFD since nine years ago, have been here several times and it’s good to be back.

How do you think about the development of documentary film nowadays?

S: Of course we already knew that the big development occurred around 15 years ago when digital camera became affordable, everyone can have it. There are also a lot of documentary production nowadays. It happened everywhere.

Now, people is choosing to make shorter film because it is quickly finished, uploaded through online platform and one of biggest advantage of cheaper technology is we can read or buy something to be saved longer, it makes there is bigger possibility to produce documentary with longer format. But, i think in Indonesia, people tends to produce short films than feature-length films.

Is there any same style or topic that implemented in documentary work in recent years?

S: I think no. There is so much variety of topics that implemented in documentary. But, of course people tends to be focused in political issues because that is the current event. Documentary is also focused in social issues that people’s daily life. Sometimes, the way of documentation of each of the filmmakers are also different, it makes documentary become more variety.

According to you, what topic is actually more possible to be implemented in documentary, but rarely or even never implemented?

What obstacle is usually identically emerged in feature-length documentary?

S: i think there are no obstacle whatsoever because each films are having their own story. Yesterday i watched a very good documentary titled Phantom of Illumination and the film is included to the film that is telling us about political issue, but with smoother way and there are some ways where it didn’t feel like documentary. It depends on how the filmmaker make the film. The film was an artwork that seems like between fiction and documentary, blurring the boundary between fiction and documentary. Make us realized that this kind of categorizing is not important at all, even though in some points, the documentary characteristic still can be seen clearly like how the story is still with its real character.

What is your impression after seeing some of competition films?

S: Okay, so, i am one of Jury Board Member of Feature-Length Category Documentary Competition this year. One think must be noticed is this year, i don’t find any Indonesia film in this category. I know that there was fair decision in the curation process, meas there was deliberation in the film’s well being to be the finalist or not.

What is your criteria in judging film?

S: i think it’s unreasonable for me to determining the criteria in judging film. You can arranging basic category for that, such as research, camera technique, access to the subject, depth of explorations film narration, and whatever that is included in general criteria. This criteria can be used to judge anything, even for book. The assessment is where there is some thing unusually interesting, for me that is something which can touch the center of the character in the film. This kind of film usually can bring us to know more about someone, get into their life with the depth story about the character.

Can you give your testimony for this year’s FFD?

S: I have been involved with FFD since 2008 and several times going back here since then. There are so much changes occurred every years, FF evolved, indicating something dynamic, not always stuck in one theme. FFD can always presenting varieties in documentary films, not only in Competition Program, but also in another program. I think, that is the best thing a festival can do. Where the festival can extend its scope in diversity, maintaining its artistic integrity as the first documentary film festival in South East Asia.