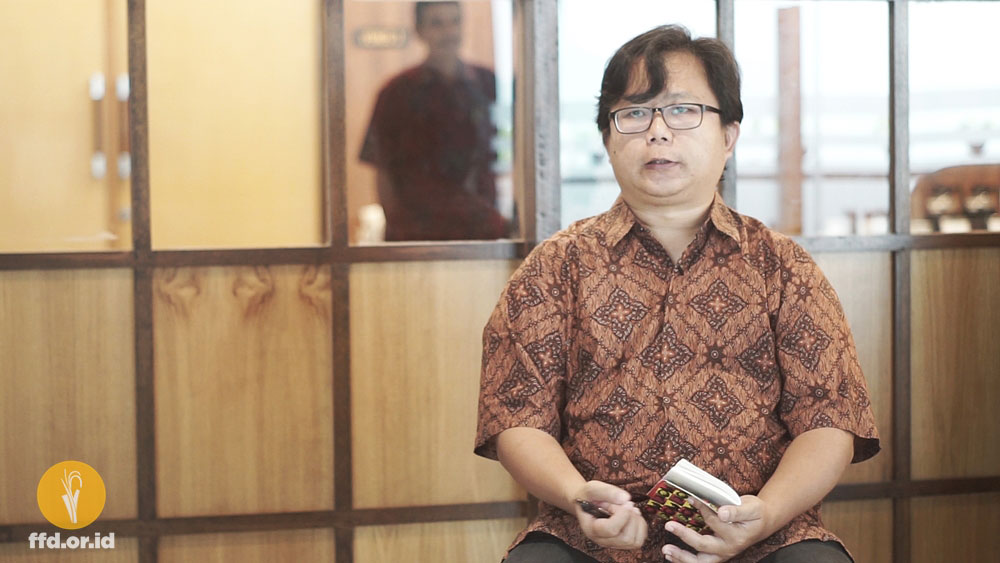 In 2017, Ronny Agustinus is back as jury board member of Feature-Length Documentary Category Competition after been there in 2015 before. His accurateness in seeing social phenomenon supported with his involvement as a jury member in several festival and his love in film makes Ronny heedful with variety of documentary.

The article below is the result of our interview with editor in chief of Marjin Kiri.

How is the beginning of your interest in film, and the involvement as jury board member or film observer?

R: My interest in film began from friendship. i learn at Fine Art Department IKJ (Jakarta Art Institute) and my friends and seniors is liking film so much. We watches the film together. Some mf my friend then establishing Forum Lenteng, organizer of Experimental Film Festival in Jakarta and Journal Footage, a journal about film. I take part there even though i’m not practitioner, it means i never been producing any film before.

According to you, how is documentary film development in the last 10 years?

R: Okay, i can’t say that i have comprehensive knowledge in this field (documentary), but from what i watch in festivals, when asked as the jury or only being an audience, and in some tv stations, i think there is new change that presented by the technology in variety of documentary. That technology still yet to used effectively i think, but there’s possibility (to be better).

Some documentary films are so good i think. Like “Nokas”, “Negeri di Bawah Kabut”, or “Tanah Mama”. We can say that they have conventional side of story telling. Meanwhile, there are some other film that is trying to get out from there (conventional story telling) by giving extraordinary story telling and unconventional medium deepening.

I think this time is so crucial to think again what is documentary film art for the filmmaker or the audience. Because of the convenience technology makes everyone can make documentary by recording it using their phone and such. And some records that become viral in media social, i think got more audience than something what we call documentary film which screened in festival or theater.

According to you, how is variety of topic in documentary this time? Is there any interesting topic, but still not so much highlighted by the filmmakers?

R: If we talk about Indonesia documentary, we can classify the topic generally about social theme figure or phenomenon. That is in general. But, social theme can be classified again, as example about women or about poverty and disaster.

Especially, because of the past history, the filmmakers are having some special interest in ’65 incidents, we know that we have so much documentary about this. Either from the victims’ perspective or vice versa. But, generally it’s from the victim, one which took from perpetrators’ perspective maybe only Oppenhaimer (Director of “Senyap” and “Jagal”).

I think there is so much thing that still yet to be raised. Means “is it right that our problems are only those?”

But i admitted that it’s difficult to get out from those grips. We need the involvement of the director in the issue, or thinking to go out from usual life to observe the circumstance. I think film about social disability is still few in number, and Wahyu Utami’s film about it is totally interesting. In jury board meeting, the Romania’s film is also interesting. It’s about men seeing their own body image and the theme is still rarely being explored anywhere. Even though there is Indonesia documentary about fitness place, produced as it is in a village. But, especially, it didn’t talk about how men seeing his their body image.

What is your opinion about post-truth relation with documentary as a medium that  explores phenomenon from fimmaker’s perception?

R: The theme Post-Truth for me is so interesting and actually i expected to find more film related with the theme. Because this theme is really urgent nowadays, because of technological development make it possible to manipulate films which has no precedence yet, and it can be so eyes-tricked about what right and what not, and documentary take a big role there.

I think documentary is in the middle of that fight. Like in some disputed cases. As example they who is in the pro side with tobacco industry and those who against it. I know that Djarum has been making documentary that screened in Metro TV about the impact of the restraint towards cigarette and its labor. Meanwhile Human Right Watch, not long time ago released a documentary about how

From both sides, i think there is some dishonesty or deception in catching an issue. As example an issue about child laborer. Western perspective is seeing that children should be in school from 8 in the morning until afternoon. Meanwhile in our village life, children is taking part in working in the field, that is not laborer, but a part of their playing and learning process.

In this situation where everyone is fumbling with which information that is right and wrong, documentary is taking role in shaping someone’s perspective about an issue.

What is the impact of festival like FFD for documentary climate?

R: i observes that FFD itself is experiencing changes, based on what i see in the implementation each years. This year, FFD  is already moving further forward from when i became a jury for the first time (2015). The film choices from the curator is totally different from then. I think that can affect the next generation.

I think the films that submitted this year mostly influenced by what is considered good before, and what is believed good now will aesthetically affect the audience which want to be filmmaker in the future. If this year that change can be seen in its medium processing, several years back i think the film that submitted still focused in the issue or issue-centered. This year, the films are more comprehensive in seeing how the issues are being voiced. As the medium played to deliver the issue, so it is more complex now.

How is you determining value criteria from documentary?

R: First of all, like all of artworks or film. One, it should have at least an effect to the audience. That effect can be anything. But, it should be something that can build new way of thinking about what have you seen. Two, of course as documentary work, there should be new information, especially about what we doesn’t know before. The info can be factual fact or how is the response of the subjects or people that portrayed there towards the fact or the events.

I think those all are requirements for good documentary work. But, how those are packed through special technique and style of course can give them more assessment.

Of course we need the audience to see our work, but documentary anywhere will be still difficult in attracting audience than the commercial works.

Is there any testimonials for FFD?

R: like i said before, this year I’ve got so much surprise, as someone who’s been in festival several times. There is so much good change occurred to expand the horizon about documentary. I think FFD should maintain this change for next year forward.