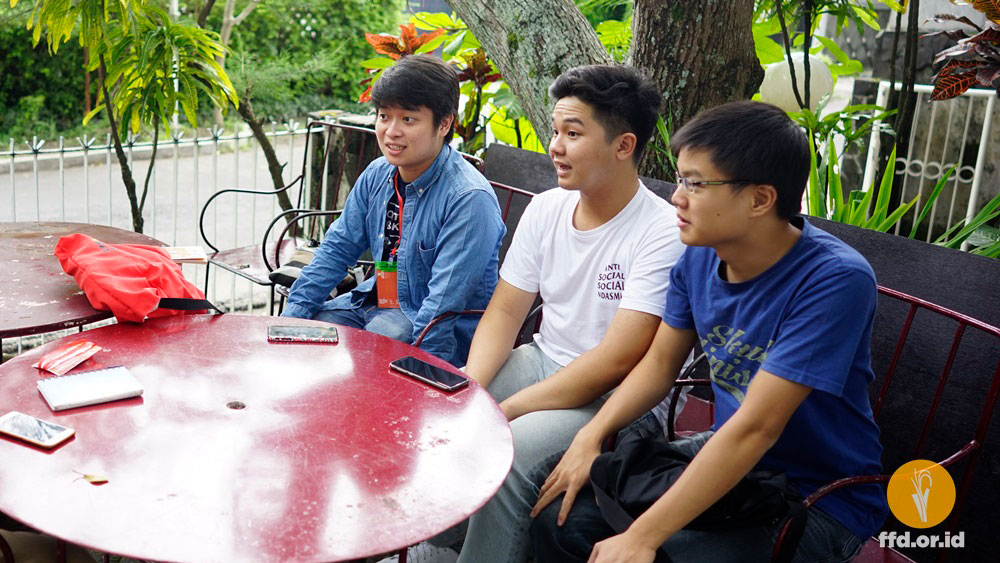 Interview with Hore Besok Libur, The Team behind ‘Ojek Lusi’

Ojek Lusi invited the audience to remember the disaster of Lumpur Sidoarjo (Lusi) through the victim’s life. After 11 years and never resolved, the disaster that drowned 16 villages is finally developed to “tourism” site and encouraging new professions by people there, one of them is ojek driver doubled as tour guide.

Publicist Team of Festival Film Dokumenter 16 has interviewed the team of Hore Besok Libur as the production team of Ojek Lusi, one of the nominator of Short Documentary Competition FFD 16. They are Winner Wijaya (Director), Antonious Wilson (Producer), and Cornelius Kernia (Script Writer/Sound)

What makes you raised Lumpur Sidoarjo as the main topic of the film? Is there any personal story?

AW: the first idea of the film came from me. I visited there before and found tourism site instead. The victims become tour guide and there’s so much story on how they lost their home. Even, someone sell dvd about the tragedy. This is unique yet strange.

WW: I think They experiences ironic tragedy. They are victims, whose house is drowned in the mud for a long time already, but they changed the tragedy as their source to keep alive; becoming tour guide.

Ojek Lusi already received so much appreciation from several festivals and screening event. How do you think about it? Is there any personal approach in majority of the audience?

WW: honestly i didn’t understand how this happened. But, maybe because this film is not exploiting the victims’ sadness. Instead, Ojek Lusi showed another side of the victim’s life which is not different with us all. This is that i think succeed in building audience’s empathy because the victims treated as human being, not as the subject who cried over and over again.

AW: this film guided the audience’s mood like riding a roller coaster. In many times, we invited them to laugh happily. But, there are times when we were trying to remind the audience that the subject in this film is victims of a tragedy, and they has already adapted to the situation. And the way they adapted is actually not good. They forced to be adapted with the condition because they should tell their suffering to different people everyday.

This year FFD raised Post-Truth as the main theme of the Festival. The idea presented to introduce people how documentary is involved in spreading its version of truth related to a phenomenon. What do you think about it and where is the position of Truth that “Ojek Lusi” had in between the information about Lumpur Sidoarjo?

CK: actually, we can say that this film is having a comparison. In the research stage, we found “Mud Max,” a film with same setting.. but, we didn’t want to make our film look like that. They film was too focused on the natural condition and showing the pathetic side of the tragedy. In today’s condition, that is nothing. So that, we then  make different version of it. Besides, they’ve already adapted, utilizing whatever exist to make life and actually enjoying their life. They go through as it is.

AW: Ojek lusi came as additional information of the forgotten tragedy. This film invited the audience to remember again the tragedy that is still not resolved yet even after years. How can we? Through the story told bt the victims who live their life in unique way.

WW: Many of films and information about Lumpur Sidoarjo is ordered by the media. They have their own interests. There’s so many filters. Fortunately, we didn’t take the same path. We lived with the victims, sleep there, and made the film as what we experienced there in the producing process.

Do this film ever screened in front of the victim? Considering that they are the subject of this film? Or maybe Sidoarjo People in general?

WW: Unfortunately, we’ve yet to screen the film to them. That’s actually our debt towards them.

AW: The plan faced so much obstacles, especially we are still college students with so much assignments to do. As we planned, after the final project next semester, we will come back there and will be screened the film in front of them.

CK: We even considering to give the copy of the film to them as a token for them. After that, its up to them to treat the film in the future.

Can you tell us about your experience as the part of Festival Film Dokumenter 2017?

WW: This is our first time to be here. So far, we are happy with everything in here. As established festival, FFD be able to present good-planned screening climate compared to other festival we’ve attended.

CK: We hope the festival will be keep going. Don’t even think to stop. And hopefully it will becoming bigger and bigger as its years of implementation.