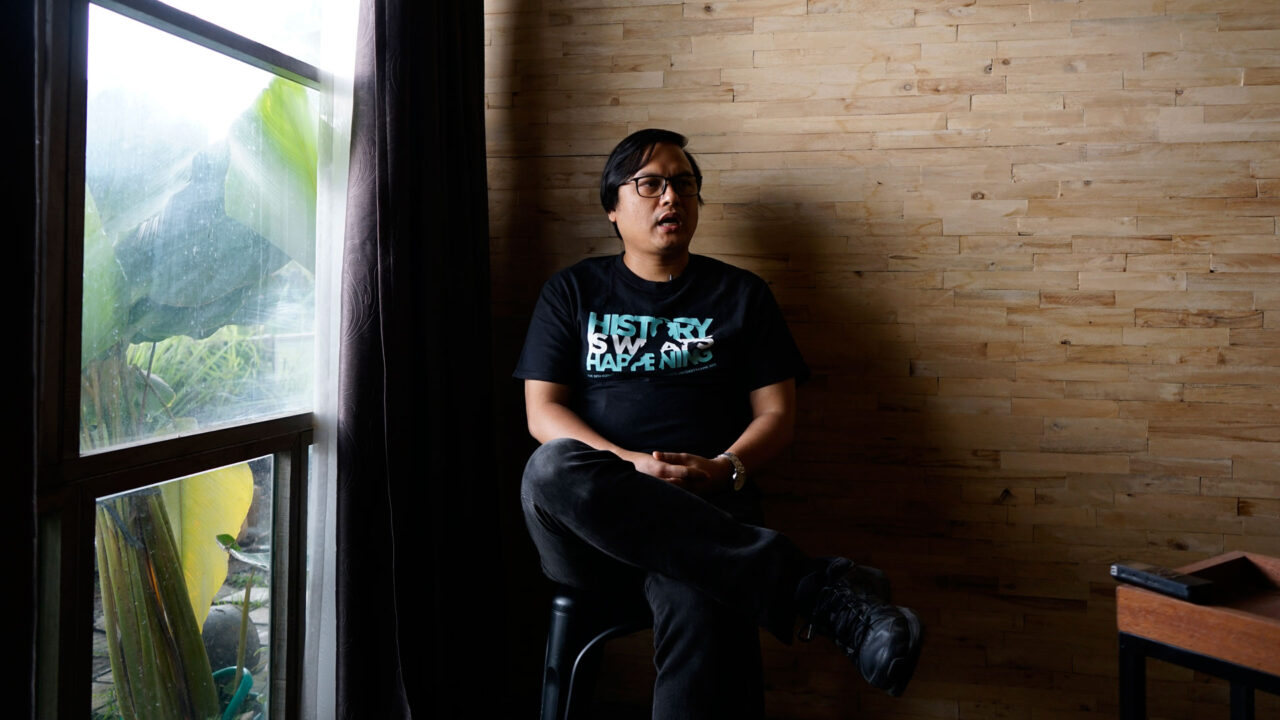 Aryo Danusiri, an Indonesian documentary filmmaker who often uses observational approach, found problems in Indonesian documentaries. He thought that filmmakers still build a dualism between text and non-text, which places facts only in utterances, separated apart from images. This will only create stereotypes and perpetuate them.

This year, Aryo Danusiri rejoined the Festival Film Dokumenter (FFD) as the Judge of the Short Documentary Competition. Check out our discussion with Aryo in the conversation below:

As a documentary filmmaker, what is your impression when observing the finalists of this year’s FFD short documentary competition?

Then, this so called mind is associated with the deepest character, with psychology, the character of the person. So we tend to put people in stereotypes, rather than understanding ‘how one struggles with social conditions, social environments, the natural environment, which makes people change dynamically and differently ‘. Well, that’s what I think is a problem. Because, in this framework, understanding someone goes along with understanding their actions and understanding their practices. We don’t see the root, we only see the top layer of how the person moves. Well that’s what I’ve seen so far in the film.

For example in Niqab (2018), how they distinguish interview scenes, with scenes that capture words, and images only as illustrations for words conveyed in verbal. Again, there are special treatment to words; how reality actually is involved between words and events. That becomes a problem. Because reality is in fact not only just a manifestation of what people think. But rather is the negotiation process; dialogue between mind and action. Between people and the situation around them.

That, in my opinion, is a problem, because then documentaries remain and are still in a situation that privileges verbalism. It’s no longer a pictorial expression.

From the analysis, do you have a depiction or categorization of documentaries in Indonesia from time to time?

Actually there are several institutions that form their own style. For example, Mas Dudit’s films about Sumba, which at that time won in FFD; I forget when. There is a character development there; which erodes tradition. Yes, that time the popular style was not observation, they are still in the form of docudrama. Why did Dokudrama appear? Yeah… because the country is financing it.

Then film festivals still have the orientation that documentary is just a format or another expression form of fiction. Then, in education aspect, they have not yet introduced various documentary styles. But, at the same time Garin Nugroho, made a documentary with a different style, because it can be seen that he had a peer group that was socialized among others, such as in the cultural centers of France and Germany.

And after the reformation, we began to explore new styles. We started elevating history to something that is no longer buried, muted. After the reformation, many of us still raised topics around this, with investigative documentary styles. Then we got tired of this style, then observational cinema appears. Well, the problem now, (this style) seems to have stopped. A new style should emerge that can continue to grow. And, once again, it is affected by actors or institutions present in Indonesian documentary ecology; education, festivals, and all things that construct this.

Is this problem also related to how film in Indonesia is not based on one estuary?

Yes, because the basic is embedded in film style is a theory of knowledge. So it’s about how the style constructs the way people see. The “style” is not just a visual style – like angle and everything, but it’s actually a way of seeing, thinking. But sometimes people are too nervous, nervous about the relationship between innovation and popularity. That is, between one style being remade as new, then followed and become a trend, then later being pointed as the one who has problems. In my opinion, these two things must always be there. But the problem is, who is actually in charge of presenting these new innovations? That is the most important. So that there is always a new perspective, how to see reality and react to it.

In your opinion, what elements need to be present in documentaries and are usually missed by filmmakers?

If they still feel like it’s done only by getting words rather than seeing how the words live in everyday life and how those words appear, disappear, go away, even hide in everyday life. Finally, when they really intend to make ‘drama’, they only add music. Even though the drama was actually present when suddenly the words appear, and in the next few scenes it disappears. Then in the next scene it is betrayed. Now that’s drama. There is a loss, there is betrayal.

Now, how does the betrayal occur and involved in everyday life. That is actually a different way of seeing drama in an expository documentary, or for example an observational documentary. But there are also dramas that are different from mainstream styles such as poetic documentary or performative documentary.

In your opinion, what are the topics that are not yet appointed by documentary filmmakers in Indonesia?

They usually talk about social justice. But, the problem is not “the” social justice. But again, back to the way of how they think. It’s not a matter of topic, but rather is how ‘Personal is political’, how that perspective is also important. But often the term social justice is expressed as ‘fist’, with protesters shouting. They don’t see that many things that happens everyday and trivial are actually very, very political.

In your opinion, what should a festival create through its competition program?

A festival is actually like a ceremony. A ceremony is conducted to initiate a moment to discuss values. Well, the problem is oftenly, the value is only given in a very limited form. Like the value of ‘who first finished eating crackers?’.

In fact, film competition is not a cracker-eating competition, right, but actually there are new values, there is a value of innovation, there are new trends introduced to the public. Because of these new values, new styles become a new way of thinking to see problems. So actually, that’s what matters. How to view festivals as ceremonies, but not ceremonies that keep repeating old values. Or how they always introduce new values.

Last question, what experience can you share after attending and being involved in this 2018 Documentary Film Festival?

This year’s FFD is interesting, because the programs not only talk about documentary itself, it means seeing films as just films. But rather is how the film presented as a way of seeing, thinking. So how does (the function) documentary as visual thinking really manifest in various programs in FFD. In my opinion it is the thing that can make FFD always updated and relevant for Indonesia.