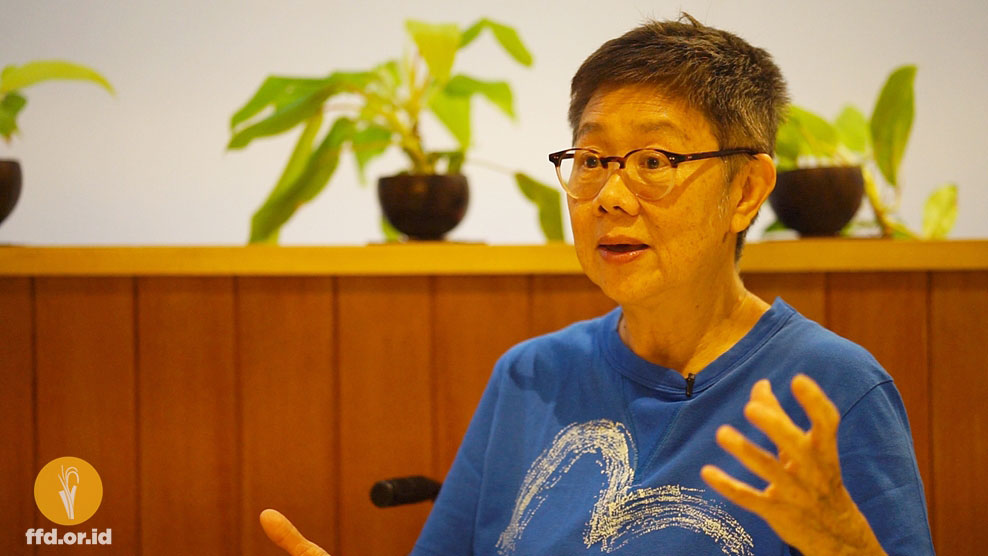 Interview with Angie Chen, Director of I’ve Got the Blues

I’ve Got The Blues is a documentary about the artist Yank Wong. painter, art director, set designer, writer, musician, and photographer. He is a true renaissance man who expresses his creativity in multiple forms. More than a portrait of an artist and the creative life, the film is also a high-octane cat- and – mouse game between filmmaker and subject: one tries to capture, the other evades. Publicist Team of Festival Film Dokumenter met with Angie Chen as the director of this film. Angie talked about the importance of filmmaker-subject relation, to independent film struggle in the midst of Hongkong’s Hollywood-centric film industry.

Can you tell us how did you get into documentary films?

A: First time it’s gonna be a long story. I actually made a short documentary video about my father when I was in college, that was my first documentary film. And afterwards I got into narrative features, I made three movies in Hong Kong. Then I made advertising films, TV commercials, and started going back making documentary features. It’s just you know, after doing commercials for a long time, I decided to make my own film again. So you know, when you make a TV commercial, they tell you what to do, what they want. And I just want to do a film of my own and that time I thought the fastest, easiest way to do it is to make a documentary because you don’t need a big crew, you don’t need a lot of money.

One day a french friend was visiting at Hong Kong and he is a cinematographer so we talk and I ask him that I want to do a film and he said that he will help me. So I look around and ask what topics because at that time I had a dog, who was very old and dying. I felt quite painful, it was like person dying. So I said to him that I like to examine this relationship between an animal and a person. And we started to do a film on people and animal but eventually it turned out to be a film about people. About why we feel that particular feeling, what is love and relationship.

You are quite productive as a filmmaker, how do you see the public and audience in Hong Kong to alternative films?

A: Difficult, I think it’s still very difficult for independent and documentary films in Hong Kongg. Because Hong Kong is basically very commercially oriented as we all know. You know, kungfu films, triad films. The public are made to watch those films. Alternative films don’t have a platform, cinemas don’t like to show these films because they think these films are not money making. So what we need to do is educate the audience and if they got to see more of these films, they will know that documentary is not like what they thought. Because there’s a misconception in Hong Kong that documentary films are long, boring, tedious. But it doesn’t have to be, films are films. In documentary films we tell stories as well as narrative films. We need to know how to tell the story well. That is the same.

In the last few years, the scene is changing a little bit. I think there’s more acceptance towards alternative films, like artsy films, more experimental films, and documentaries. So I’m hopeful.

You have known Yank Wong for quite some time, and it’s not a sudden decision to make a film about him. But what made him such an interesting subject to be filmed?

A: This goes back to my film making. Basically I’ve always try to select topics that interest me, it needs to be worth my time. Because making a documentary is different than narrative films. In narrative films we have a script, it’s easy. We shoot 20-30 days, because we know what to shoot. Done. And then you go to editing. But with my documentaries, in average each film has taken three years from beginning to completion. It’s a long process because I follow the subject for a long time. Because I think you have to follow in order for the interesting things to emerge. It’s not like you ask question, and he answers. No, you need to get the intrinsic value coming out from what ever you do and you need time. And also because I need to be passionate about the subject that I choose.

For example I’ve done three features, I always know the subject for a while and there comes the time when I decided that it’s interesting to continue examine the subject. Same goes to my second film. It’s called One Tree, Three Lives (2012). It’s about a writer who lives in America, who has a fantastic life because of the character she is. For me, I find enlightening characters are very worthwhile to cover, meaning if you show this film eventually and I find it the person to be really inspiring then I think the audience will find it inspiring. I’d like to focus on films that can inspire, I guess, because life is tough, right? And it’s always good to have a message that can inspire people. So this one with Yank, I’ve known him for twenty years. We’re just friends actually. And he is a very, very interesting guy. After I finished my second feature I was looking around for something to do and suddenly he’s there. He’s a musician, painter, writer, set designer, and a photographer. I mean lot of people will call this kind of person a Renaissance man. But he is so low key that nobody even now not a lot of people know him except for people in that particular circle. So I think, he is different, and his work is really good, I think quite talented, so I thought well, it’s interesting. Actually when I started, I didn’t know him that well, he doesn’t speak a lot, kind of withdrawn, so why don’t I start follow him and hopefully I can find more about this person and yes, I did.

Have I’ve Got The Blues screened in Hong Kong?

Any testimony for Festival Film Dokumenter?

A: I think it is smaller festival but it’s founded by an Indonesian filmmaker, and the oldest documentary film festival in south east Asia. It’s been 16 years where in Asia nobody has ever started having a documentary film festival, having interest to promote documentary films for 16 years. So for me it’s important to support festivals like this, and the festivals to support us, filmmakers. I think that’s why we decided to come here, because it’s really worth a while. And I always find it really interesting to share the film and talk to the audience from different countries, and they come up with these really interesting questions that you never think they would ask. So I’m looking forward to face the audience in Indonesia because I’ve never been to an Indonesian film festival before. And after this I think we’re going to Dublin, Ireland and hopefully we can bring the film in march in Hong Kong International Film Festival. This time hopefully we try to distribute it in the theater as well in Hong Kong.