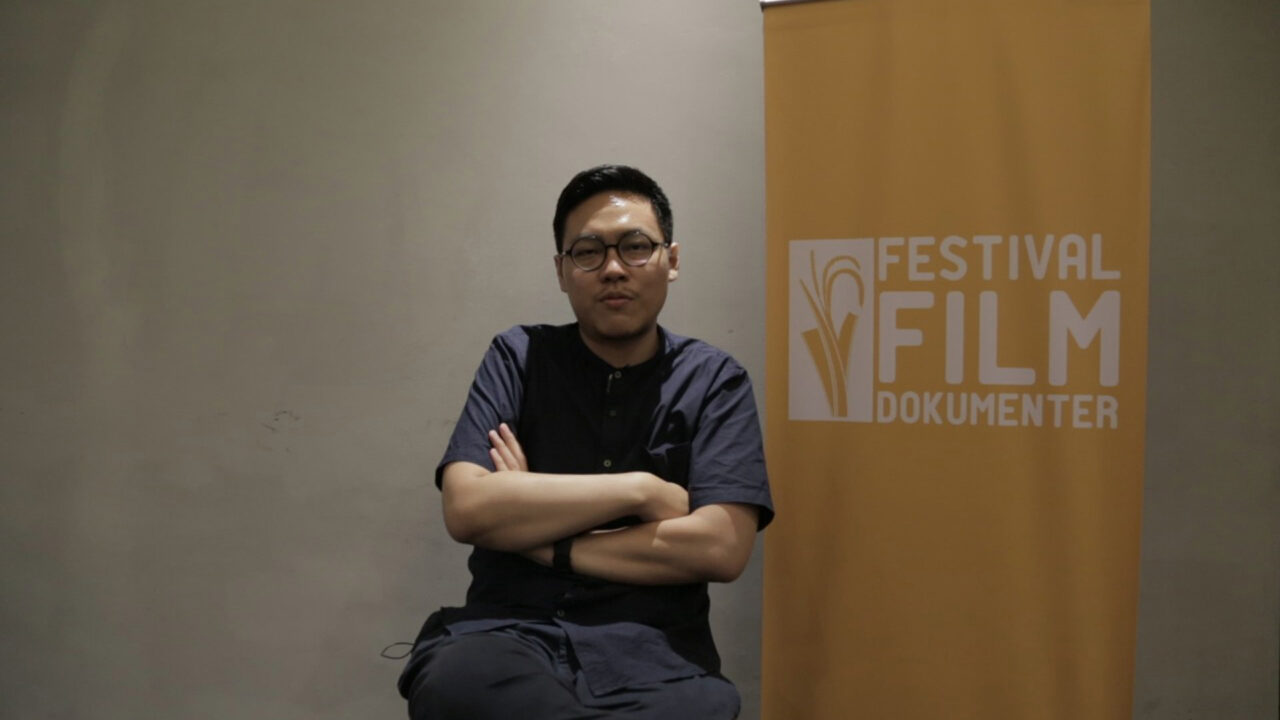 Alexander Matius, programmer on Kinosaurus Jakarta, an alternative screening program, and one of the drive on Cinemapoetica , saw competition as an important entity and needed to be present at a Film Festival. For him, the competition program not only presents as a meeting space between the film and its audience, but also forms a new standard in film ecosystem, in this case, documentary.

Follow our dicussion with Alexander Matius, one of the judges of the 2018 Festival Film Dokumenter (FFD) Student Category Competition.

How do you rate this year’s finalists film submissions FFD student competition?

The thing is, we can say (the topic or issue raised) are close to their daily lives. They can pick a phenomenon or issue that most directly touches them. It is what seen from the five finalist films in the student competition. Then, the five films also have their own approaches. They also have various methods. There is no certain theme which almost certainly all films that entered this year’s competition have. So I think it’s interesting to be able to see that (topics, approaches, trusted storytelling methods) in this year’s student competition films.

Can this diversity differentiate this year’s student’s films from the previous generations?

So far, there is nothing new. But, in some films it can be seen that they (filmmakers) already have a statement that is strong enough on their respective issues. That is what can be best described. Also, maybe filmmakers mentored by their seniors, their approaches and styles are not too significantly different (with their seniors). But they (already) are bolder or more straightforward in issuing their respective opinions.

Does this diversity also tells us how a particular area of ​​society views an issue?

Looking at the forms and styles, more or less they look just the same. That is to say, there is nothing distinctively unique. It’s kind of coincidental, because the films come from different regions, then the storytelling method is identical. They can capture things more detail and specifically related to the issue and phenomenon, especially in the particular area. This is best seen from the shots they use.

In your opinion, what is the importance of the student category competition in the scope of Festival? Is it only a space that brings filmmakers to their audience?

Actually, when we talk about competition, (the direction) is shifts towards “the standard of our film is today”. That is the most visible. (Competition) comes as a benchmark ‘the milestone of our film today ‘.

For meeting area, yes, it can actually be done with regular screenings, or with festivals (through other programs). But competition has a pattern to always looks for the superior. It’s what we can see later this year, to which point can our students make films. How far has it goes? Has it developed from the past year? Has it decreased? Or is it just the same? So then the competition exists more to build new standards from the existing standards.

For me, a festival is an arena for everyone to gather, from all aspects. Audience, filmmakers, and all (parts of) the film ecosystem come to gather, then to communicate with one another. Well, the competition is part of festival because it’s important for that benchmark to be witnessed together by many parties. The connection is more to that. And, of course, this program is distinctly different from the others. Because from a competition, which certainly has prizes, can encourage the continuity of filmmakers’ work. So, competition is very important to exist in a festival.

As a programmer, how do you try to change the public’s view that claims documentaries as heavy shows?

It is more on we pack a very specific theme, very relevant to the public’s daily life. It can be the diversity of the films, showing one specific theme we have picked, then put the shock aspect; maybe in the selected films. It can also be shown with side events, other activities, it doesn’t always have to be a discussion.

Maybe, combine it [film] with music or outbound – if you have the funding enough to enter. And, it must be done consistently. Because, I quite believe that consistency will build public interest to ‘absorb’ a work. It is important to keep. So later on, screenings like this, is ‘there’, interesting and important to study.

What do you think about Festival Film Dokumenter 2018?

It is actually my first time attending FFD, but I have heard of FFD for a long time. What needs to be appreciated is the consistency of FFD. To be able to run it, to be able to continue to be one of the driving force, the driver of documentary screenings at festival scale. Because there are not many festivals that discuss specific types of films such as documentaries.

This year is exciting. You can meet many people, of course. Given the opportunity to see how our students today, voice their opinions and emotions that are channeled through the film. Yes, hopefully, the spirit will continue, until the next FFD.