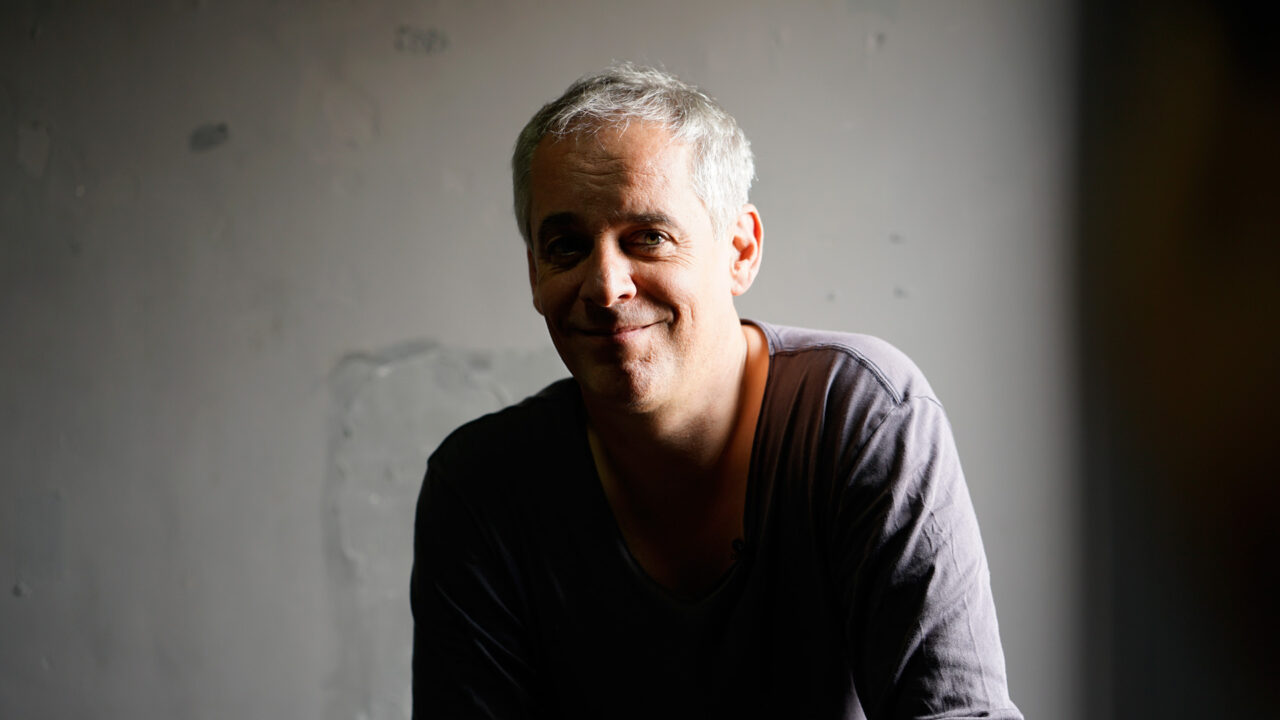 On Friday, December 8th, 2018, FFD’s Media and Publication team had an opportunity to talk with a German director, Sebastian Winkels. This year, FFD is cooperating with Goethe-Intitut in the program “School of Seeing” which screened Winkels’ newest film, Talking Money, for the first time in Indonesia. The following is FFD team’s conversation with Sebastian Winkels.

Why did you decided to work in documentary?

In general, why do documentary, I am fascinated to capture life of people and every essence it from. It’s difficult and sometimes it’s didn’t work. But if it’s happen it’s quite magical. I like that aspect, the authenticity that you find sometimes.

How was the situation of documentary cinema in your country? What was the role of the government and how was the public’s reaction towards the documentary works in Germany?

We have some source funding in Germany. I guess it’s better than situation here, where the TV station and government not helping so much for the film community to fund independent documentaries.

It is also not easy in Germany, it is a lot of competition. Many people applying for a few slots. So I guess, it’s difficult pretty much everywhere to make enough money and enough budget for your film. And like Talking Money, it’s been done with television station in Germany and Switzerland. So there are possibilities.

In the last of 21 years there’s a lot of film school coming up in Germany, and there’s a lot of new imaging filmmakers coming out and looking for the opportunities to work. So there’s a fierce competition to get to your film funding. It’s not easy.

I think the audience like documentary, it’s not always easy to them to find it. Because TV station quite late, so they put it in late night slots. It’s a pity to you to find it after the news. But we also have documentaries in cinemas. And audience must could be fighting, like everywhere against the internet. People going so much not like before, they watch everything on their cellphone now. So, we also kept fighting to build the audiences.

Can you briefly tell us the creative process in the making of your latest film, Talking Money?

For me the ways start with the question that I find. In this time the question was: do I become another person when I talk about money? Because, when I am going to the bank for the first time, and sit there at these tables, I suddenly became somebody else. Like I was need and found it very strange. And I have to tell: maybe people feel the same. All over the world, when we start to really talk about money, we are a different personality.

So that’s how I start. To take a closer look and found what actually happen at this table. This is a place where we pretend each other. I found it very interesting and I want to build a film around this situation. I’ve never told of myself in terms like money. But in these table, when you talking about money you need to design yourself, when they ask you a lot of questions, and you answer. I found its weird, you don’t to be authentic. You even pretend and lie. You like a puppet at the show.

There are eight banks in eight different countries that became the objects in Talking Money. How did you determine it? Did you choose it based on particular considerations, especially about the economic condition of the countries?

I was more interesting to catching more different societies. So, rich countries, poor countries, more capitalist oriented countries, more socialist oriented countries, also different religion countries: we have one Islamic republic countries like Pakistan, we have a former Soviet Union republic like Georgia. We have countries that has a strong bounds of Catholicism like Bolivia. So I want to see like how people that brought up in different society and of course in different languages react in this same situation. To see whether is it actually true that all over the world people talking about money like this, or i find big differences.

It’s actually not really based on certain consideration. Europe in this film not only represent in a richer side like Germany or Luxembourg but we also have Italy and south Italy like Napoli.  I was more interest in social background, that cheap people telling about their private stories about family and I imagine their situation outside of the bank.

What message did you try to convey through Talking Money?

I don’t want that my film give you a message. Really I want you to reflect on your own relation toward money. I want to explore our relation toward money in a whole world. I try come up with the interesting case, and I want to portray the psychological situation at the table. But I don’t want to make a film that says: it is good, or it is bad. I want to show the equal things. The best side or the bad side on the table. I didn’t want to make the film, let’s say, confirm a banking or financial system is bad. I saw that was pretty much obvious and don’t have to do that again, and it’s pretty much common sense. I don’t make a film that against the financial system.

It is more a private film about: do we exactly trust each other? Or why do we still sit at the table? As if it nothing happen like financial crisis ten years ago. I want to see maybe more anthropological sense, what is actually happen today at this table?

This is the first time Talking Money was screened in Indonesia. Why did you choose Festival Film Dokumenter as the premiere venue?

I am really happy that I got the translator. Because it is very important to you, to follow the each conversation, to get to know the situation. So you can understand how people talk to each other.  I really like the festival, I know it since a few years. I cannot come every year.  It is a several years I know people who running of it and really funding of it. And I really happy it work out and I can show the film here at this day.