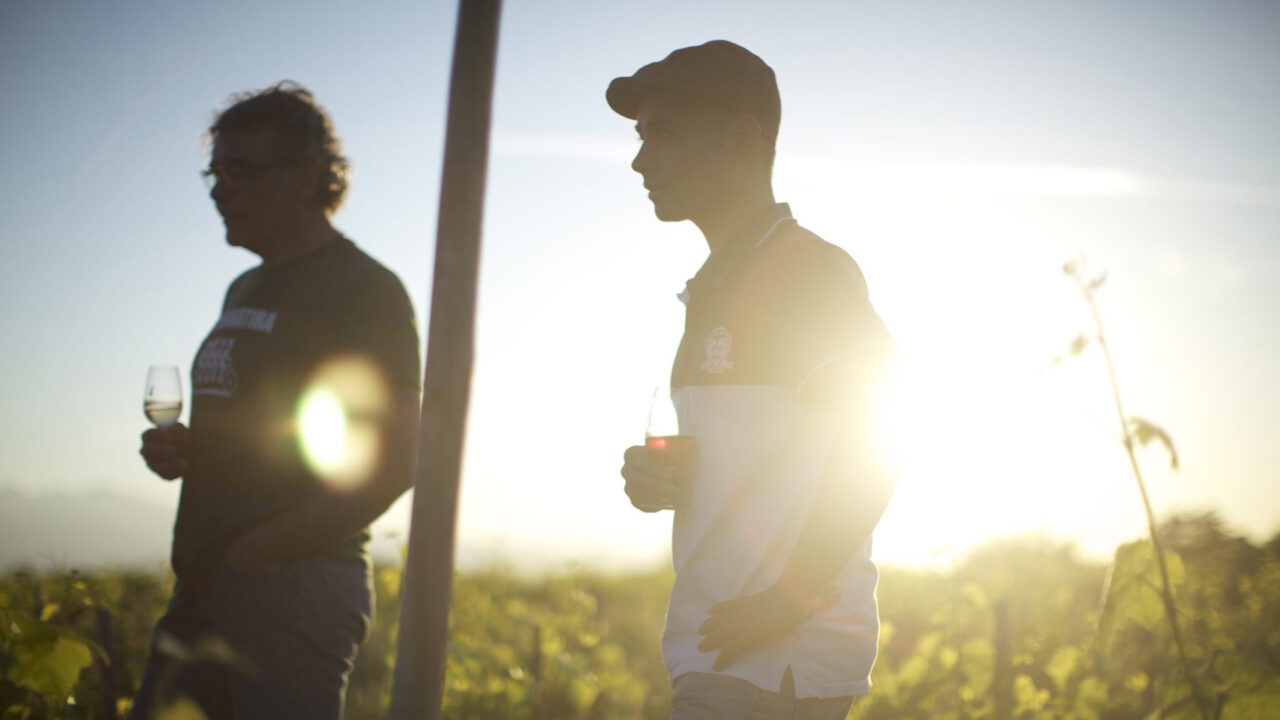 ‘Eating’ –as a verb– in fact isn’t merely about what is served on the plate. It’s a festive ritual, an intersection as a beginning of a long process. A sequence involving history, culture, up to collective identity or individual. Involving questions concerning who, what, where, when, why, and how. Therefore, every means attempted to shift the ritual merely as a physical pleasure, is a reductionist. At least it’s what believed by Jean-François Nicq, our main character here.

Moreover, this attitude might be the underlying reason of the title chosen. Wine Calling (2018) can’t help but reminds us to a same title of this classic piece, The Clash, London Calling (1979). Such reasonable title pick, considering the director, Bruno Sauvard, is capturing the daily life of Jean-François and those who called the generation of neo-winemakers. As if Sauvard wanted to capture the resonance on the reality, that Joe Strummer and The Clash live by, with the one he pointed out in his film.

However, all Jean-François does is nothing but refusing elitism alienating the wine itself. Everything Jean-François does, whether it’s on the grape farm, processing site, or even until wine is served on the dinner table, is a choice to not pull wine apart from it’s communal trait. As a winemaker, it’s as if Jean-François does not want his wine to be outcasted in an antique art collector’s wine cellar, which perhaps won’t even make it to his lips once in a year. He does not want his work of art to be imprisoned by industry constructed labels, that has been so caught by elitism, and putting wine merely as a symbol. Until the judgement left is only determined by physical measurements. Where it came from, when was it produced, and other terms or numbers monopolized by the wine snob circle.

Through the montages of wine farm landscape, dining room, house backyard, till restaurant kitchen, Sauvard captured how wine in Jean-François’ life does not present in void. It associated itself in the aspect of relation and emotion; connecting people with their socio-cultural scopes. Relation between workers, humans with animals—through a plough–pulling horse, residents around the farm, up to the relation human beings have with the earth and its presence in the form of material and ideology.

With the production approach that does not want to eliminate the presence of human and its nature, Jean-François proposes novelty in the wine industry. In the end, this ideologist attitude also translates to a technical scope by refusing the use of pesticide, yeast, and other artificial compounds that are common to be used in the making of conventional wine.

Just like London Calling brought up Joe Strummer’s experience in the middle of nuclear doomsday fear, Jean-François is expressing a similar concern. Fear of ecology disaster that will not just sweep out London alleys, but also his own grape farm. It could come in the form of nuclear, or the use of pesticide that reach an alarming level because everyone failed to care. Furthermore, the industrialization reducing a communal experience on the dinner table, to merely an appetite fulfilling ritual constructed by consumerism–driven civilization.

Finally, Wine Calling is a ‘call’ telling us that it’s never too late to pay attention and be aware. Regarding on handing down a legacy of a better world than the world we are living now. By bringing wine to human beings, refusing on how it’s treated merely as a certain social class symbol. Later starting a revolution with the warmth on dinner table, wine mill and the market, along with preserving a room to live, with the reminder to always have fun in the back of mind.

Wine Calling has been screened under the program Le Mois du Documentaire on 26 November 2018 at IFI-LIP Yogyakarta. Complete FFD 2018 agenda could be seen on schedule.