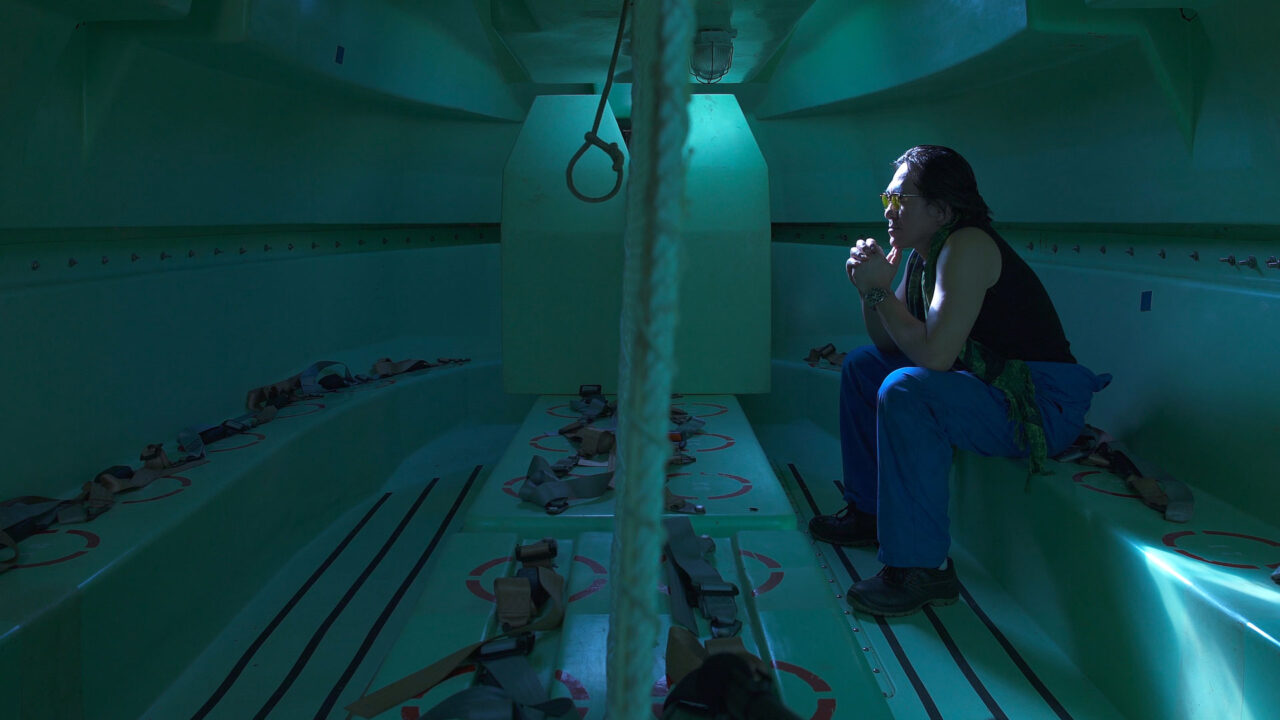 “Flee, my friend, into your solitude! I see you deafened with the noise of the great men, and stung all over with the stings of the little ones. Forest and rock know how to be silent with you. Be like the tree which you love, the broad-branched one — silently and attentively it overhangs the sea. Where solitude ends, there begins the market-place; and where the market-place begins, there begins also the noise of the great actors, and the buzzing of the poison-flies”

Capturing reality which is so noisy it is deafening voices of mind, Giorgio Ferrero through Beautiful Things (2017) proposed his reflection on human existence amid bustling industrial machine. The human relation between themselves and others occurred at the same time with efforts denying the inevitability of silence.

Juxtaposition became Ferrero’s keyword to read the reality. Discarding class analysis, he brought a new world through the lens of cargo ship technician, scientist, oil refinery technician, to worker in waste management center. He put it side by side to the life scenario of a couple and revealed the personal question bursting behind the depraved capitalism.

Beautiful Things was more than just a mere documentation of those isolated from the capitalistic production. The seclusion didn’t just stop at production; it has been inseparable from human life as a social being in the continued capitalist civilization.

However, for those who didn’t have the luxury of this hyper consumptive civilization product distraction, silence is not something to be afraid of—it’s the only frame to understand existence. Through silence, they could capture the harmony occurred between whirring metal friction and dreams-filled silence of how their lives should have been.

In a completely different reality, Ferrero presented a story of a couple living in capitalism dream. A house to shelter, various devices to satisfy consumerism desire, and pseudo-hospitality in urban life. Isolation, to Ferrero, is the connecting line of two separate realities since it denies staying idly in a place where the exploitative production process happens. Isolation exists from a feast with relatives to the most intimate relation in the bedroom or living room. And isolation leaves both realities in imaginary, hollow happiness.

Ferrero then shaped this connecting line in form of two audiovisual composition composed of his understanding of the four workers’ characteristics. Childhood memories spent with metal monster in oil refinery and recollection of a mother from someone estranged with the relation between human and cyber society. Fragments of marriage bond were also shown from someone who has spent their life wandering and thus estranged from the concept of love and affection. The past life of the waste management worker before he turned a martyr of hyper-consumptive civilization showed that memory is just as empty as the reality he lived in.

In other composition, Ferrero offered a quasi-anarchy manner to end the film by the character of a couple that grows weary of their usual routines. Living a nonstop cycle of acquire-dispose, they were left nothing but a little room for them to grow as a human. As Nietzsche said, “He who obeys, does not listen to himself.” Hence, they chose to raise their middle finger to consumerist living cycle where it is most celebrated: supermarket. The option to reject life in a non-human world and instead packed with mountains of products in a ritual dance where both realized that the choice to be human, was always in their hands.

Beautiful Things presents, without patronizing, “political” messages. Ferrero didn’t want to seem to be looking through the same lens as those who let voices become mere empty and hollow noise. After all, silence is merely a perception; no more than just a form of partisanship to listen to one voice and ignore others. Ferrero interpreted silence in his refusal to the dichotomy of sound and silence. He knew that in a civilization where sound made as trade commodity, values are frequently confined by language. Ferrero tried to understand silence by the stories of people he recorded, listened to himself, then determined his manner via the couples’ story that has conquered their fright to confront silence and reject being alienated.

Beautiful Things is a movie of Perspektif program which will be screened on 5 December 2018 at 13.00 WIB at Societet Militair TBY. Complete FFD 2018 screening agenda could be seen on schedule.