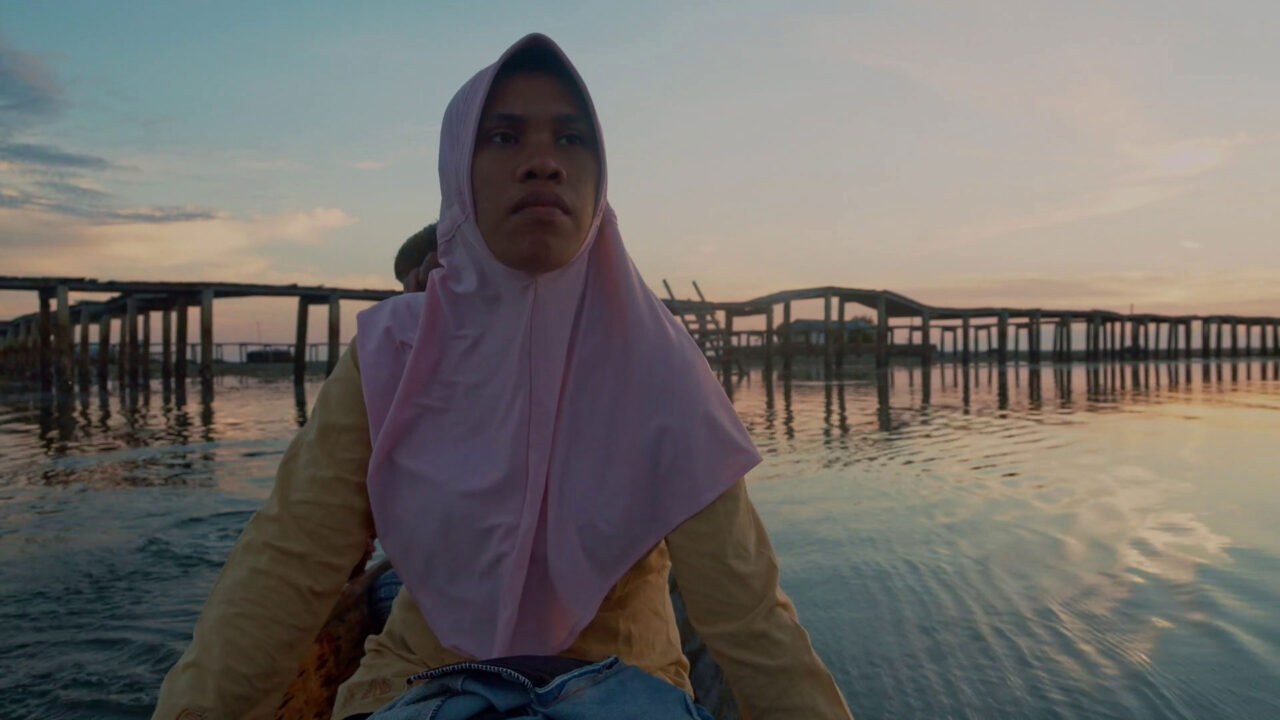 Between the Devil and the Deep Blue Sea (2020) portrays Ona’s journey in pursuing her dream regardless of her haunting dark past.

Between the Devil and the Deep Blue Sea (Dwi Sujanti Nugraheni, 2020) takes audiences to see the life of a fisherman family in Kaledupa, Wakatobi and their struggles in order to survive and pursue their dreams. This film sums up the journey of a tough girl named Ona who aspires to be a marine biologist.

The filmmaker presents a well-compiled story of Ona’s journey in Between the Devil and the Deep Blue Sea (2020). For the sake of her dream, Ona needs to study through university. She travels hundreds of kilometers to get to her campus. She is also the first person in her family to experience university life. Growing up in a fisherman family, Ona has to take quite a lot of effort in order to achieve her dream.

Tuition fees are the main problem for Ona and her parents. She has almost given up and dropped out of the university several times. Although obstacles seem to prevent her ways in pursuing her dream, Ona remains strong and continues to work to make ends meet. With a great effort from her parents and herself, she is able to continue to study.

Behind her toughness, Ona hides an unforgettable dark past. It took her a long time to open up about it. She was raped by her boyfriend on their first date during high school. The status as a “non-virgin” girl forced Ona to get engaged with the offender for the sake of her family reputation.

Started with Ona’s narration on her traumatic experience, Between the Devil and the Deep Blue Sea (2020) successfully let audiences feel the suffering that she endures. Ona’s story proves that virginity is still used as a measurement of self-esteem and social status of a woman in Indonesia. It is imaginable how broken Ona’s heart is as she is engaged to the offender for the sake of her family reputation. It’s all due to the bad stigma of being “non-virgin”. Such pain could have been avoided if that kind of stigma were reconstructed.

That kind of stigma should have indeed been reconstructed to avoid its endless painful impact. Don’t let it harm other rape victims. It is necessary for the victims to be protected instead of obliging them to be responsible for the actions of the offenders.

This film makes us aware of and empathize with the rape victims. It makes us aware that they should open up and report the cases. Thus, the offenders will get the punishment accordingly. Moreover, the victims should get proper treatments. Hence, they will understand that they did not do any wrongs and their life remains valuable to be lived.

Between the Devil and the Deep Blue Sea (2020) is a part of the Lankap program at FFD 2020. Watch the film for free here.